If Twitter was available to our favorite Game Of Thrones characters, we might still be enjoying Ned Stark and his family! Twitter is THE choice when it comes to delivering your messaging, especially if the other choice is a messenger-raven of Westeros. Twitter has reach, the ability to interject personality and can even be used for private and direct messaging. Unlike the messenger-ravens of Westoros, whom only the likes of Lannisters have access, Twitter is available to everyone who makes a choice to learn how to use it.

It’s always important to use the right social platform to get your message to the right audience at the right time. That’s is a heads-up choice. Otherwise, you might end up like Rob Stark and his mom being in the wrong place at the wrong time … and more of a heads-off result. 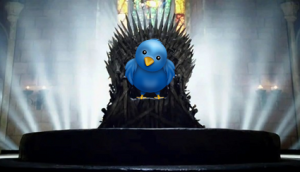 Here is why I strongly suggest against using a communication alternative, like the messenger-ravens, to deliver your news. Move toward adopting Twitter as a key platform for your business voice, communication and content delivery.

Here are some Twitter tips that will help you from losing your head:

Choosing Twitter to communicate is a “heads-on” move and will help you be the master of your digital domain! Yes, Twitter if for the birds. Just pick the right one!