This article, which recaps my keynote session at the Gilbane Conference, first appeared on SMS Wire and was authored by Dom Nicastro.

SAP North America’s social media program was featured during this morning’s keynote on Day 1 of the Gilbane Conference here at the Westin Boston Waterfront Hotel. 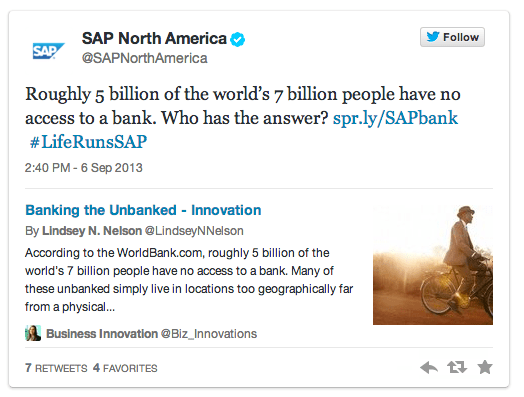 Gerry Moran, head of social media for SAP North America,said SAP has a metric that directly ties its social media programs into sales. Speaking to an audience of several hundred, Moran explained that his organization uses a third-party vendor that provides mechanisms that tie social media engagement and activity back to revenue.The software system tracks links and codes that convert social media activity on Twitter, blogs and other forums back to sales, conversions and leads. These performance metrics can show how customers’ social media engagement with SAP tie directly back into revenue.

Not too shabby since all we hear in the social media marketing sphere is that C-Suite cares only about its ability to produce ROI. It’s a “what have you done for me lately” kinda world, and likes and retweets aren’t exactly doing anything for CEOs.

It’s what keeps digital marketers up at night. Want proof? A software consultant approached us after this morning’s keynote and told us this is exactly what he’s heard — how marketing struggles to tie programs back to sales.

Brian Goins of I-Cubed in Raleigh, N.C., a software consultancy, said the constant struggle for the industry comes down to producing direct ties of marketing into bottom lines. “The main struggle for social strategy or any kind of content strategy is tying it to the numbers,” Goins told CMSWire. “What numbers relate to your bottom line?”

Goins, who develops content for a company blog, said he was impressed with one keynote speaker who stressed it’s not about what you have done but what your customers want.

So what works for SAP? Here are a three key strategies SAP deploys in its social media platforms:

At the end of the day, Moran said, you worry about whether someone is doing business with you and how your organization measures awareness and engagement against conversions. That final question is one for which many digital marketers would love to have an answer.