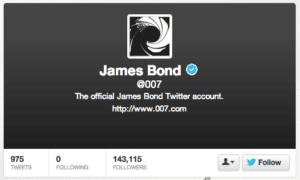 I want to show you how you can use these same spy techniques to use Twitter for competitive intelligence and get the inside scoop on your competition.

5 Ways To Use Twitter To Spy For Competitive Intelligence

1. Check Out The Competition’s Lists For Competitive Intelligence. Get inside your competitor’s mind by perusing their public lists to see how they are classifying their followers. Once you check them out, you can subscribe to their Twitter lists and follow what they follow! 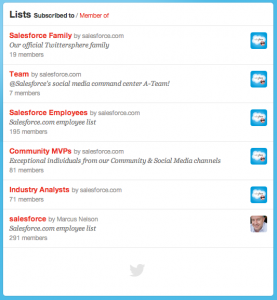 2. Add Your Competition To A Private List. Secretly receive real-time, competitive intelligence updates of events, updates and news. No one will know who is watching whom. You may have to read in between the lines, but it’s easy to keep tabs on the competitive comings and goings by being tapped into their Twitter stream. You never know there might be a slip up that you can catch!

Coaching Tip: Since you are limited to 20 lists, be thoughtful with your listing strategy.

3. Use Twitter’s Advance Search. Twitter’s advanced search feature, which can be found at search.twitter.com, is a great way to generat specific competitive intelligence. You can use key search options that include questions, sentiment, from and to Twitter handles, geography, hashtags and keyword combinations to find critical information.

Coaching Tip: Save your searches for easy access to updated information. 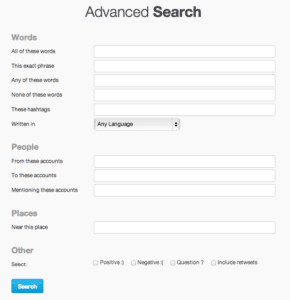 4. Follow Your Competitor’s Event Or Product Hashtag. Event tags, like Oracle’s #OpenWorld or SAP’s Forum are easily followed for real-time messaging and updates on Twitter, Instagram, Vimeo, YouTube and RSS feeds. Following an event in real-time will help you develop a competitive response or messaging plan.

Coaching Tip: Set up a feed on Flipboard, a tablet and desktop feed aggregator for easy viewing.

5. Follow Your Competitor’s Followers. Place all of your competitor’s followers in a list to watch the buzz around a range of topics from excitement around an event to problems with a product!

Coaching Tip:  Introduce some of these followers’ tweets into your content stream to get attempt to get on their radar so you can begin to grow a relationship. 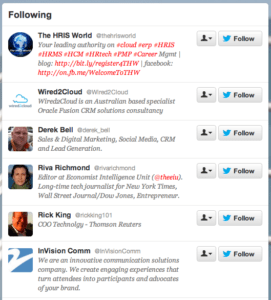 People Who Are Following Oracle

Do you have another 007-technique to use Twitter for your competitive intelligence? Please share your tips below if you do! Or, reach out to me directly on MarketingThink.com. You can also follow me on Twitter @GerryMoran.