Everyone has to start somewhere; even CEOs and the C-suite with using social media. Some CEOs have embraced social media to authentically connect with their constituency. And, they have done it more effectively than the pointy-haired boss characterized in Dilbert!

However, not every CEO has jumped on this “new corporate communications” opportunity. Many are not relating with customers, coworkers and ‘the street’ and leaving valuable social currency on the table. In fact, only 30% of executive directors within NASDAQ 100 companies are present and active on social networks, compared to the 70% that have no presence on online platforms, reports Wired Investor.

Why aren’t more CEOs using social media to build their reputation, communicate their company’s story and drive business results? Everyone wants to see more c-level social media engagement. Weber Shandwick’s recent research reports that 76% of executives think it’s a good idea for CEOs to be social, so they can narrate their business story and news. There are many ways for CEOs and other members of the C-suite to socially connect with their customers, including blogging, Twitter and LinkedIn. When someone, including a customer or an employee, Googles a CEO, the search results should point to various channels that help the CEO’s influential story that inspires, informs and deepens relationships.

Every CEO and C-level executive has the power to connect and engage with social media. Below are 15 prominent and social CEOs and their very first tweet. What an authentic and great start for each CEO, which spring-boarded their message to connecting with customers, co-workers and analytics on their terms! 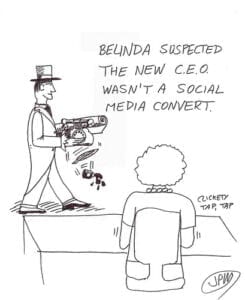 These C-suite leaders all get an A for their authentic and engaging jump into social media and Twitter. Their respective tweets from as far back as when Twitter started were a springboard to their current recognition as a social CEO, most of whom were recently recognized by the World of CEOs study, published in late 2013.

Jeff’s first tweet was a customer-service reply. Great way to connect with customers!

Angela initially reached out directly to the Ball State Millennials on their own channel. She shows she is comfortable with hashtagging, too!

Eric used his first post to attribute a great interview experience, expertly engaging with the press.

Reid nicely shares someone else’s content with his first tweet, showing that CEOs can be great curators.

Bill starts his tweeting referencing his philanthropic work, indicating the good work that Twitter can do.

Jack first approaches Twitter with an open invitation for all to engage. Nice!

Jeff uses his first tweet to share a live appearance, which could have teed up the opportunity for others to engage.

Drew shows that he is listening first and then tweeting, by providing insight, and an authentic apology, into a customer-service challenge.

Bill does a great job of rallying and supporting his 67,000 SAP evangelists; everyone that works at SAP. Great job keeping it real and engaging with the assets that walk in and out of the doors every day.

Phil listened first and then leaped into Twitter with an answer to a negative customer experience. He demonstrateda a great way to turn around that sentiment to work to make it positive.

You have to love when a CEO uses his first tweet to syndicate a customer case study. Nice work by Michael.

Bruce uses his first tweet to announce his accessibility. Nice way to keep in touch with the customer base!

Mike used his first tweet to speak directly to the shareholders. More and more of this audience expect this type of CEO connection.

Do you know of another CEO that jumped into social media the right way? If so, please share below. Or reach out directly to me on MarketingThink.com, or on Twitter, LinkedIn or Google+.

Remember, everyone has to start somewhere and this is how 15 great CEOs did it on Twitter! You can learn a great lesson and start to use social media to engage with your own clients, co-workers or network too, whether or not you are a CEO.